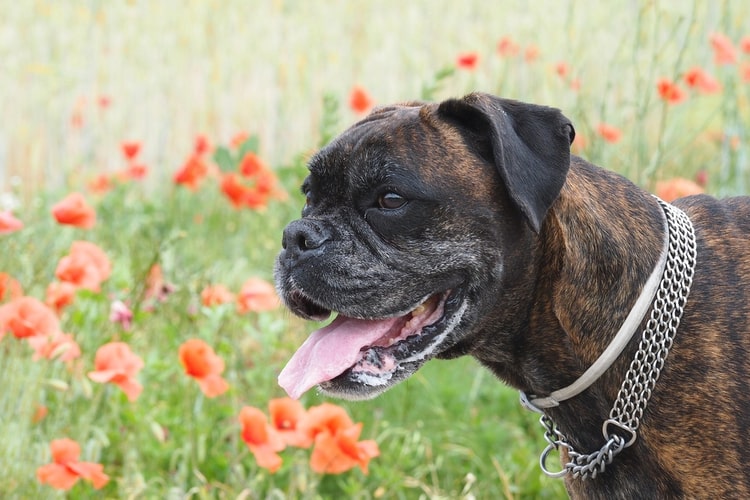 Among flea collars for dogs, the Seresto Flea Collar for Dogs is a popular option. It’s easy to apply with no messy, greasy topical applications to deal with, and it lasts for eight months, so you don’t have to worry about remembering to apply a topical flea treatment every month. As with all flea prevention treatments that use pesticides, some dogs may have a reaction to the active ingredients in this collar. For those that don’t have reactions to the ingredients, though, most customers say it works well to prevent fleas and ticks, as well as for treating existing infestations.

Our Score for The Seresto Flea Collar for Dogs

About the Seresto Flea Collar for Dogs 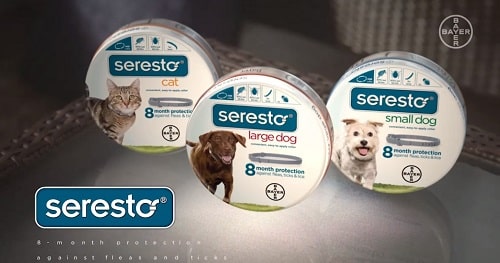 Providing eight months of continuous flea and tick prevention, the Seresto Flea Collar for Dogs, a Bayer DVM product, is a long-lasting option compared to many flea collars and other flea and tick preventatives. Unlike many flea and tick prevention products which only kill pests after they’ve first bitten your pet, the Seresto Collar works on contact, both killing and repelling fleas and ticks. The active ingredients imidacloprid and flumethrin are released using sustained release technology, releasing both active ingredients slowly and continuously in low concentrations. As active ingredients are released, they spread from head to tail through your dog’s coat and over your dog’s skin. The result is continuous protection that’s just as effective after seven months of use as it is on day one.

Topical flea and tick treatments often must be applied every few months – sometimes monthly – and can be messy and difficult to apply, leaving your dog’s fur greasy for several days after application. The Seresto Collar, on the other hand, is non-greasy, odorless, low-maintenance, and easy to use, even alongside other ID and tracking collars. It not only kills fleas and ticks on contact, but it also kills lice and can even be used to help control and treat sarcoptic mange.

Because fleas and ticks can bite your dog and spread disease all year long (despite common belief that fleas and ticks are only a problem during warmer months), the Seresto Flea Collar makes it easy to provide effective protection for your pup all year, for eight full months at a time. The collar is water-resistant, meaning it’s still effective after swimming, shampooing, and exposure to rain or sun. For dogs who are bathed or swim more than once per month, the control duration is slightly reduced: the collar will offer effective flea control for five months and effective tick control for seven months.

The Seresto Flea Collar for Dogs has a number of important features that set it apart from similar products:

There’s a lot to like about Seresto’s Flea Collar for Dogs.

Like most flea and tick products, there are a few potential downsides to be aware of when considering the Seresto Flea Collar for Dogs.

What are the side effects of the Seresto Flea Collar? 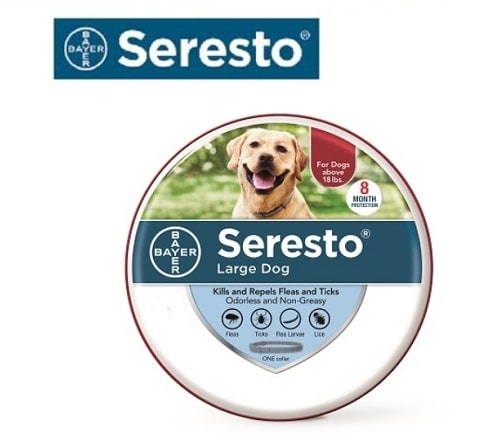 According to Seresto’s product label, mild application site reactions can occur in dogs with sensitivities, including redness, hair loss, and scratching, although these symptoms typically diminish within a week or two without the need to remove the collar. Temporary collar removal and bathing may be recommended until these symptoms have disappeared in some cases.

Dermatitis, inflammation, eczema, or lesions can occur at the application site in very rare cases. If these side effects occur, remove the collar from your dog and monitor your pup closely, and if these symptoms persist or worsen, contact your veterinarian immediately.

The Seresto Flea for Dogs is effective for preventing flea and tick infestations for up to eight months. Because the active ingredients are released slowly and continuously over the full eight months, coating your dog’s skin and coat, this flea collar doesn’t lose effectiveness over time. It eliminates both adult fleas and larvae, and works for existing infestations and as a preventative. The Seresto Flea Collar kills fleas and ticks on contact, so they don’t have to bite your pup for the treatment to work.

How long does it take for Seresto to start working?

The Seresto Flea Collar kills fleas that are already on your dog within 24 hours, and any re-infesting fleas are killed within two hours.  Pupae from pre-existing infestations in the environment may continue to emerge for six weeks or more, and Seresto also aids in controlling flea larvae in your pup’s surroundings by killing them on contact with any Seresto-treated dog.

Ticks already on your dog when you first treat your dog using a Seresto collar won’t be killed immediately and may remain visible and attached, so when applying the collar, you should remove any existing ticks from your dog. Within 48 hours, the Seresto Flea Collar starts to prevent new tick infestations, after which re-infesting ticks are repelled or killed within six hours.

Is the Seresto collar safe for dogs?

Generally, the Seresto Flea Collar is safe for use with most dogs and puppies seven weeks and older. If your pup is a senior or is debilitated, breeding, pregnant, or nursing, consult your veterinarian before using this product. For all dogs, use caution when applying the collar to avoid getting the product in your dog’s eyes or mouth.

Positive Reviews
Overall, customers who like the Seresto’s Collar say it works very well to repel fleas and ticks. In fact, some customers say they’ve tried many other flea and tick prevention options, from natural products to topical applications, and nothing has worked as well as the Seresto Flea Collar. Reviewers say that while it may seem pricey for a single collar, the fact that it prevents fleas and ticks for up to eight months makes it well worth the cost.

“We have an outdoor dog that is absolutely covered in fleas nearly year round, since we don’t get hard freezes here in North Carolina. We’ve tried Frontline, Capstar, Program, Advantage, flea collars, flea shampoos, spraying fipronil in the area around the barn where he lives, diatomaceous earth, brewers yeast and garlic, cedar oil and cedar chip bedding, and nothing worked. We even used corn oil to coat and suffocate the fleas, which worked but only for a day or two. I was convinced that these are zombie fleas and immortal. And the poor dog was miserable and scratching.

I hesitated to pay $50 for a flea collar that might not work, but took the chance and ordered this Seresto collar. We put it on the dog two days ago, and I’m amazed! The first day, we noticed that the fleas on the front half of his body were gone. Today we didn’t find one single live flea on him, nostrils to tail tip. We did notice some dead ones on him. This is the first thing we’ve ever found that got rid of/killed the fleas! He was lying happily in the sun this morning, not scratching or twitching, for the first time in months.” – Lisa Kearns, Amazon, 5/25/17

“I was skeptical about this collar because of the price, It has been about a month since I put it on Buddy and I have not seen a flea or tick on him since, plus he had a bad case of red inflamed belly skin and constant ear scratching that has cleared up, probably caused by some kind of mite. He is very active, roaming all night on our acreage and swimming in the pond all the time. I was using topical drops, but they seemed to have no effect. Even it only lasts a couple of months instead of the claimed 8 months i would say it is worth the cost.” – Steve, Amazon, 5/1/18

Negative Reviews
The most common complaints about the Seresto Flea Collar are from customers whose dogs have had allergic or other reactions to the collar. There are also some reviewers, however, who say this flea collar doesn’t work, noting that they’ve found ticks on their dogs despite the collar.

“This product seemed to work pretty well. My dog would still occasionally get a tick on him but it was often dead. My main complaint is that it caused a reaction on his skin. He had sores and hives. At first I didn’t even suspect the collar because I had been checking the collar daily for the first week to see if there was any reaction, but after a week of being fine, I figured we were in the clear. Then about three weeks in I noticed a sore on his cheek. I thought maybe he hurt himself on something. Then a couple days later I noticed it was spreading and he was getting hives. I still didn’t suspect the collar because it was on his cheek and it had been fine for so long. I thought maybe he got bit by a bug or something. Finally, it occurred to me to check the collar and sure enough he had sores all underneath it. What’s really annoying is that by this time I had just missed the window to return it.” – Amazon Customer, Amazon, 7/15/18

The Seresto Flea Collar for Dogs is a good option for treating existing flea infestations, as well as for flea and tick prevention. While there is some risk of unwanted side effects (which is the case with most flea and tick prevention products), dogs who tolerate the active ingredients benefit from up to eight full months of protection. Seresto’s sustained release technology is a big plus, continuously coating your dog’s skin and coat with active ingredients over time. That means, unlike many flea collars, the Seresto Flea Collar works just as well after several months as it does when it’s first applied. For more flea and tick prevention options, check out our review of the best flea medicine for dogs.

Also, check out our reviews of other popular dog collars: The Best Dog Flea Collars 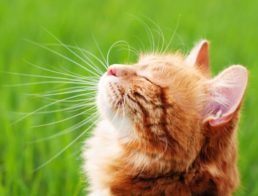 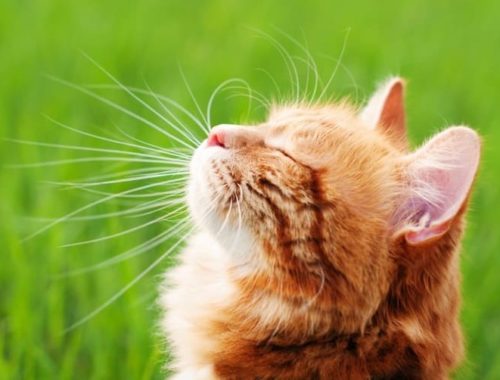 How to Prevent Ticks on Cats

When petting your cat, the lastRead Article 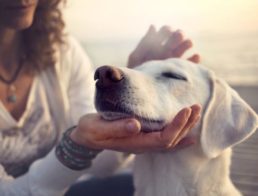 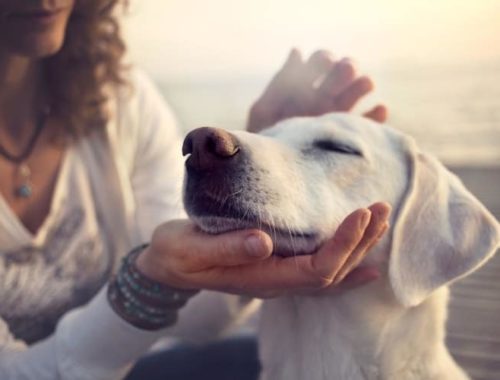 What To Do When Your Dog Has Fleas

It can be so hard toRead Article 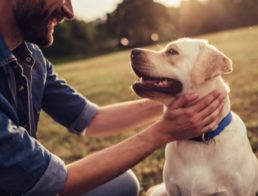 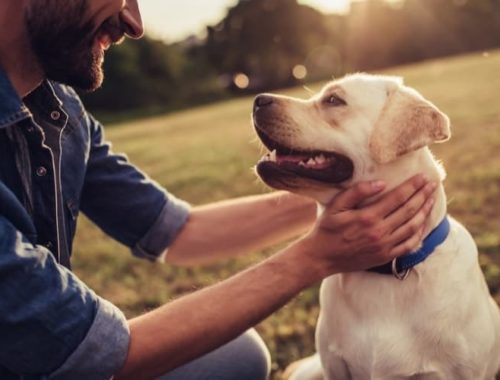 How To Prevent Ticks On Dogs 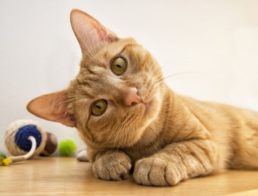 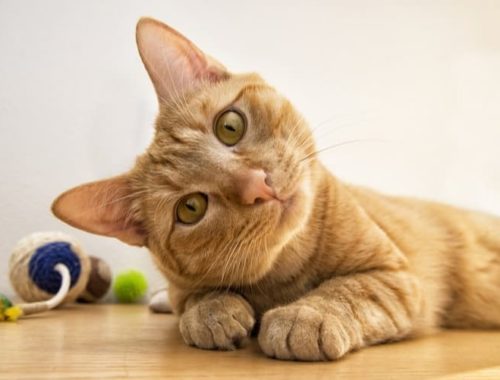 What Is the Best Flea Treatment For Cats?

Fleas can be a really seriousRead Article 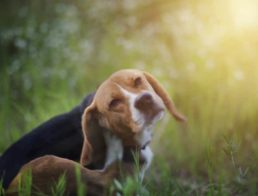 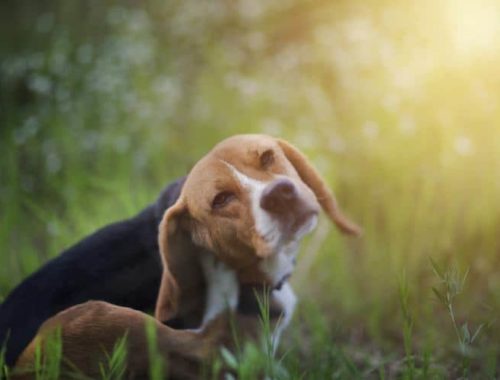 How Can I Get Rid of Fleas on My Dogs? 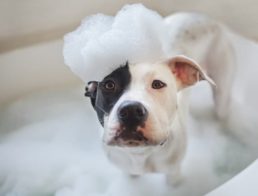 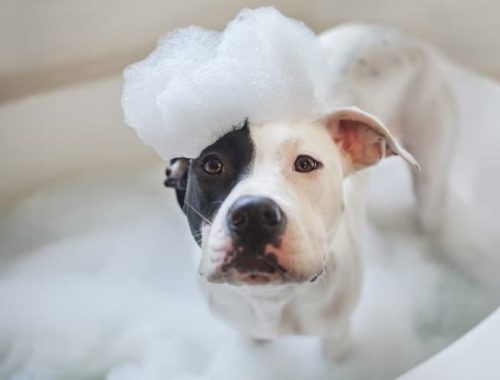 The Best Flea Shampoo for Dogs

Not only are fleas unpleasant forRead Article 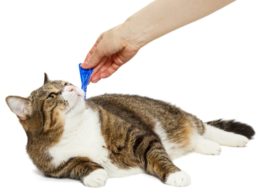 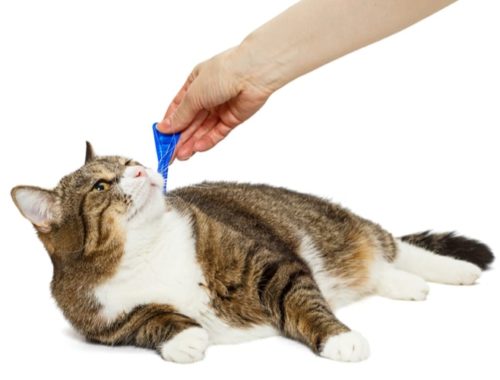 The Best Flea Drops for Cats

Is your cat scratching a lotRead Article

Summer is here! For many peopleRead Article 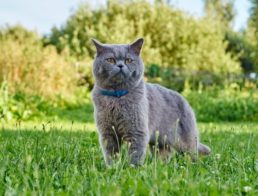 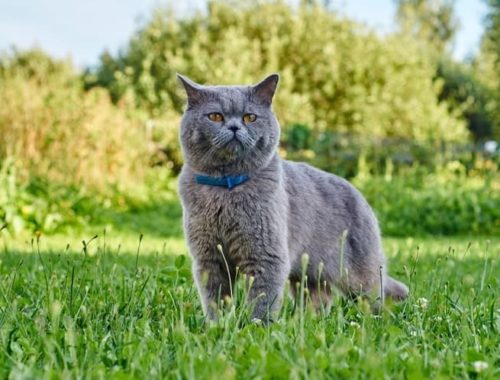 A flea infestation can cause aRead Article 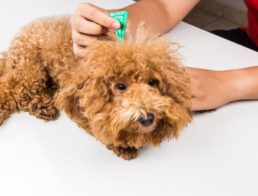 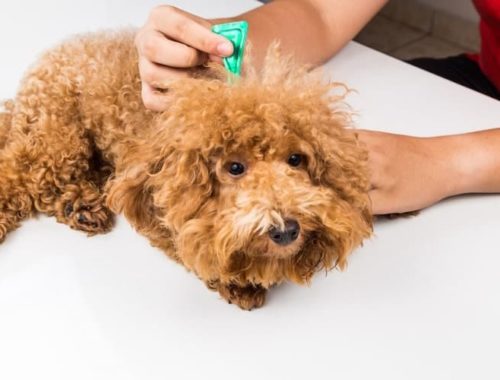 The Best Flea Medicine for Dogs 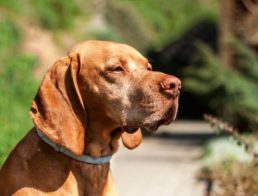 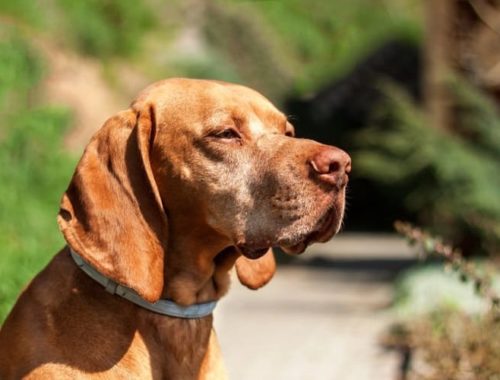 How Do Flea Collars Work? 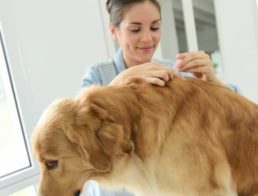 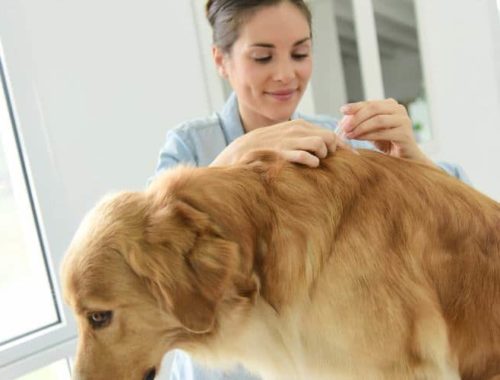 How Do I Safely Remove a Tick from My Dog?