Winners have been announced! 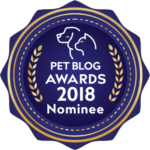 Have you been nominated? Get a Best Pet Blog Award Badge!

Django is a long-haired dachshund and also the male model for the Django brand, which sells gear for small and medium-sized adventure dogs. He’s been all over the United States, having started off in his hometown of NYC, then setting off to Lake Tahoe, Oklahoma City, San Diego, Nashville, and Philadelphia, among other places. He even joined his humans on their European honeymoon! He gives good tips on how to make your own pet as famous as he is and what it’s like to be an influencer as well as a dog.

Hamlet is a fashion-conscious therapy pig who lives the big city life in Nashville. She lives with Melanie, her human who has a seizure disorder. Hamlet, being the amazing pig that she is, has learned to detect these seizures and warn Melanie in advance, keeping her safe and allowing her the independence that she had lost. Hamlet talks about how she keeps her girlish figure with The Dos and Don’ts of a Pig’s Diet and shares the spotlight with her BFF, Melanie.

Nala is a beautiful tabby/Siamese cat mix who was rescued from a shelter as a kitten. She had a respiratory infection and for some reason, her legs stopped growing, so she is a short (but healthy) cat. She has won the Guinness World Record award for being the most popular cat on Instagram! Her blog features advice such as What You Need Before Getting a Cat and Cat Fashion Tips That Win the Internet.

Tuna is a chihuahua/dachshund mix with a pronounced overbite and a wrinkly neck, two features that don’t necessarily lend themselves to stardom, but in this case they did. He has over 2 million followers on his social media accounts, mainly on Instagram. Tuna epitomizes the truth that beauty comes from the inside, and as a rescue dog, he also strives to raise awareness of the need to adopt pets. He’s also an avid traveler; check out his adventures in Brooklyn and Chicago.

This poll is no longer accepting votes